back to Sold Stock

Rowan was sold to Bernard Stamp, who is a leading judge of Dexter cattle, pass president and current vice president. He regards her as an outstanding example of what a long legged Dexter should be. Weeks after buynig her he took her to Devon county show and she was placed third. Long legged animals have a hard time being recognised in the show ring, therefore this was a very good achievement for a young animal on her first show outing. 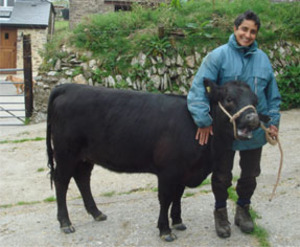