The export of the Ashott Barton bloodline to America is a dream come true. Falcon has proved his worth at Goldings (Ivan’s Herd) so exporting his semen was a logical next step. Ivan was asked for Falcon’s seamen by two people who were on the Devon Tour of 2010. Of all the cattle they saw on the tour, the Goldings Herd and Falcon captured them.

The Americans, Ivan and I share a common passion for the traditional Devon; the kind of animal epitomised by Cutcombe Millennium and the Ashott Barton and Goldings herds. Our common goal is to maintain the traditional Devon without the need to introduce foreign blood lines. There is the mistaken belief that long legged, polled and pale cattle have anything to add to the magnificence and productivity of the traditional Devon. 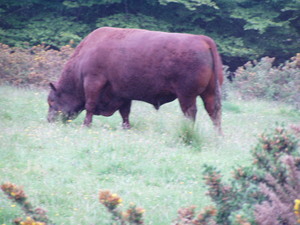 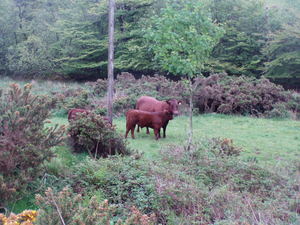 We are facing the situation in the English National herd where we are in danger of loosing the ability of cows to rear calves just on forage; there is an increasing need for inputs of concentrates thereby diminishing the valued trait of the Devon which is to be able to finish purely on forage. The hardiness, the docility, the fantastic locomotion of deep bodied animals is being eroded by the excessive introgression of the Salar breed.

The Americans have offered an opportunity to send traditional genetics to a safe haven. We are exited by opportunity to positively influence the development of the American herds, where there is a huge interest in grass fed beef. 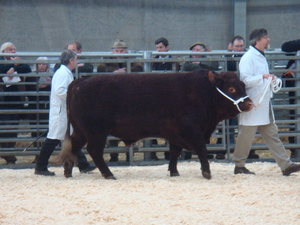 Two year old Falcon at the show and sale.

back to News
Contact Us
Login / Register
Navigation
Editors Picks