Go to: Other Stock | Dexters | Sheep 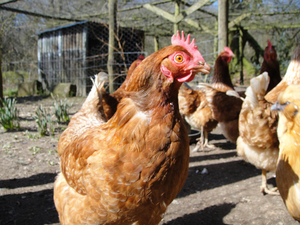 We have a small motley crowd of chickens to keep us in supply of the most fantastic eggs known to man. Sorry but they are not for sale!

We find that “eggs” so called, bought from a shop are not anything like a real egg. So you have to wash some muck of the egg, but once inside the yolk is a rich deep orange which by contrast makes shop eggs like a pale rather anemic yellow. I can do a good mornings work fulled on a real egg, with shop eggs I’m hungry again within a couple hours.

The term free range is used to describe a range of different concentration camps for chickens, here it means let them go as far as they like. Which by their choice is really not that far. Left to their own devices they will only go as far as the surrounding barns. They know that they need us (and the dogs) for protection from the fox. At night they are shut up to protect them from the fox, but that’s their only restriction! 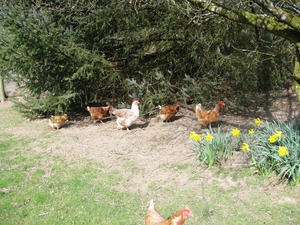 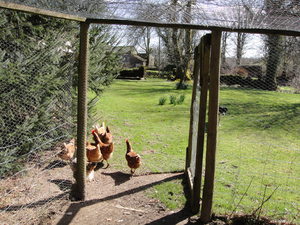 Chickens are not stupid! During the really cold spell this winter they decided that it was too cold in their little house and so they moved in with the cows. The first night I thought the fox had got them all, but eventually we found them tucked up in corners of the main barn.