Go to: Devon Cattle | Front Page | About Us

In Memory of Millennium 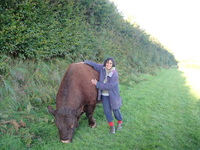 Millennium died on Tuesday, 1st March 2011. He died, as he has lived, with our love and his dignity intact. He was in the main barn, as he always is at calving time, his first calf of the year, little Lillibet, running around with his first grandson of the year and his cows close by. Jeremy and I sat by him; he fell asleep with a sedative and then a final injection from Tom, our vet.

Millennium was born on December 18th 1998. He came here on the 9th of September 2000. The Millennium bull, who has left a legacy of cows and bulls and given me the joy of a friendship with a unique being. I see his daughters and see him reflected in them.

Millennium A bull for the Millennium. On August 18th 2000, I saw a young bull standing quietly and very composedly, in the cattle lines at Dunster show. I knew nothing about Devon blood lines but I knew that what was in front of me was something special. I found his owner, who is now my great friend and adviser, and a few days later Jeremy went to Oxgrove and brought Millennium to Ashott Barton. The 18th August was Jeremy’s 18th, birth day and we had been at Ashott Barton for a month. We had bought 12 Devon cows and so began our Devon adventure in the new Millennium. Now Millennium is a very big and beautifully balanced eleven years old, still looking special and producing lovely calves that just pop out. 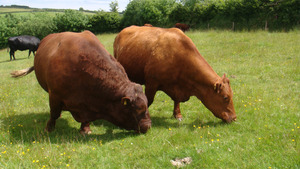 Usually bulls are moved on after three years but very quickly I was aware that I had an extraordinary animal and made the decision that he would never be sold. This meant buying another bull for a relatively small herd, to run with Mel’s daughters but it is a decision I never regret. Life can get complicated with many bulls to house in winter and there have been summers when I have had seven bulls on the farm.

In 2004 Ivan Rowe and Brian Drake affirmed all that I felt about Millennium by making him the Devon Cattle Society’s Stock Bull of the Year. At that point Ivan said, if you ever sell him please sell him to me. In 2008 Ivan bought Millennium –Falcon, the son of Millennium and the grandson of Mounts Bay Falconer. He said I have bought Falcon as you are never going to part with that bull. In 2007 Brian Drake bought Merlin, full brother of Falcon. All this as well as Millennium’s knowledgeable breeder Margaret Elliot buying Ashott Barton Marquis in 2008 has more than confirmed that this is indeed a very special bull with great prepotency.

A favorite pastime of Millennium’s is to rub his head on earth banks and tree roots. Some banks on this farm are very old, with full sized trees, and are not fenced and so he enjoys using them as scratching posts. 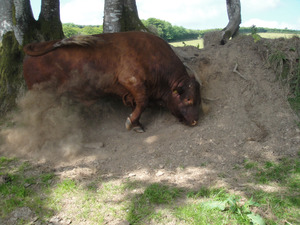 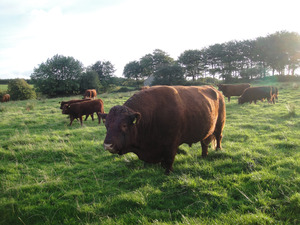 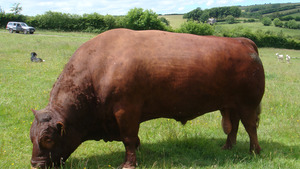 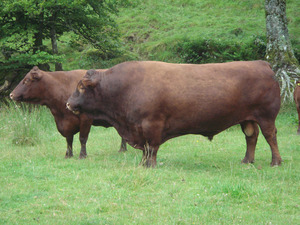