Go to: Other Stock | Sheep | Chickens 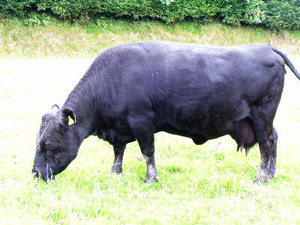 Dexter Cattle were a rare breed up to a few years ago, but have made a powerful comeback. They are small energetic Celtic cattle. I have been told that the bulls look like Spanish fighting bulls. Not being a frequenter of bull fights I cannot verify this! .

The Dexters at Ashott are all shiny black and live a free ranging life through the summer. In winter they are housed in a large airy barn capable of holding many more cows than we have. According to Soil Association standards we could have 90 cattle in this barn, but we think 15 cows, a few heifers and 10 – 15 calves is quite sufficient to allow truly welfare cantered housing. Being light of foot the Dexter can go out most of the winter without damaging fragile ground.

All the cows are handled, halter trained, named and individually known by me. They can be led in and out without fuss and shouting. I aim for a quiet farm, with happy cows.

Ashott Barton Ruby was a reserve Champion at the Devon County Show, in May 2003. Her sister, Ashott Barton Rondo, who I sold previously, was Champion Cow and Breed Champion. Ashott Barton Gio, the first bull bred here, was 3rd in a line up of older animals.

Dexters are beautiful, interesting, small cattle that produce delicious milk and excellent beef. Dexter’s have also been used in the past for pulling small ploughs and carts, and a pair once pulled a gun carriage at Earls Court! 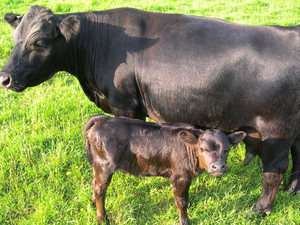 April is a very good example of a show quality Short legged Dexter. She is ten years old and is typical of how docile and easy a well trained Dexter can be. I bought her from Judy Knight who is a very successful and knowledgeable Dexter breeder.

Ashott Barton May, Aprils’ daughter owned by Marcus Milton has just begun her show career in 2005.

Many, including the “beef guru” Hugh Fernly-Wittingstall, claim that the Dexter has a difficult temperament. This is, in my view, ignorant rubbish or due to poor stockman ship. They are delightful characters who reward care given. They can be “bloody minded” and stubborn but living with Ridgebacks who have similar tendencies has taught me that the crosser you get the worse the situation becomes. quiet good humour will get you far.

Why have a Dexter?

Ashott Barton Gitano is a Dexter Bull with a imense personality in a tiny package. 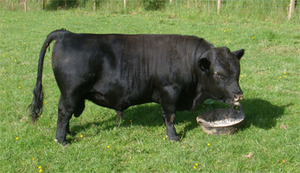