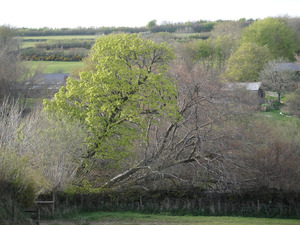 This beach is our leaning tower and has been so for several years now. It’s propped with it lower dead side and continues to flourish on the other.

The fact that half of its roots are out of the ground does not seem to bother it.

The roots now form a cave where there is enough space to walk in and shelter from the rain. 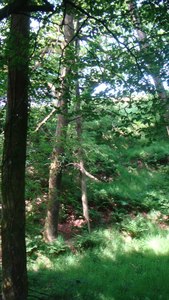 In a steep and narrow wooded valley there is a pine tree which has fallen but has managed to hook a branch onto another tree and now hangs majestically in the air about a meter above the ground! It swings and creaks in a ominous manner but has stayed put through some rough weather. It has not been effected by the usual decay as floating in the air has reduced the insect life that can get to it. 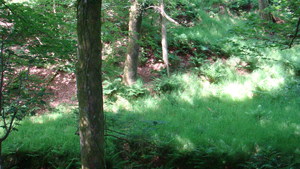 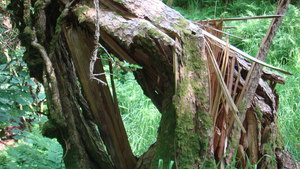 Further up from the hanging tree, in the same valley, is another tree which has almost shattered at its base. It looks like an explosion made in wood and frozen in time or like what happens to stressed metal. Its top must have been too heavy but its roots well set for its base to give up like this.

Being rooted at the top of the valley its fall to earth has also been prevented by other trees. Its top is still easily 3-4 stories above ground as it crosses, like a bridge, right over the valley.

No longer alive itself it has been wrapped in a mass of Ivy which trails down from it. 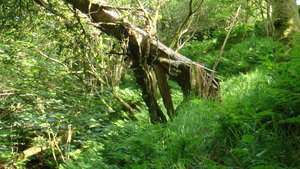 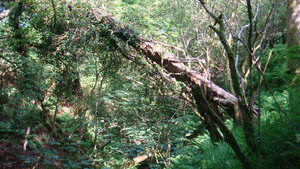 Many people would and have recommended for one reason or another to take these trees down. But why, when they are “not hurting”. In fact they do more than not hurt, they continue to provide niches for life or in the case of the hanging tree at least provoke intrigue.

back to Land
Contact Us
Login / Register
Navigation
Editors Picks