back to Tales From the Field

Bulls – Dangerous bad tempered creatures? Or Placid and so laid back as to let you draw patterns in their molting fur? 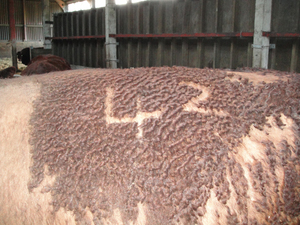 Here the latter is true, a bad tempered bull is a mythical creature. I don’t think this is simply down to how we treat them, I think it is innate to who they are, good treatment allows this trait to prevail.

Around now (late April, early May) the cattle are loosing their winter coats and tend to look rather scruffy. They also never turn down the chance to get a back scratch and great handfuls of fur come loose and they seem to almost go into a trance.

While giving Millennium a back scratch I had the idea to write something in his fur. So I left a tribute to Douglas Adams and the Hitchhiker’s Guide to the Galaxy.

Later I perpetrated the same crime on our young bull “Boy” whom we bought from the Drakes.