back to Tales From the Field 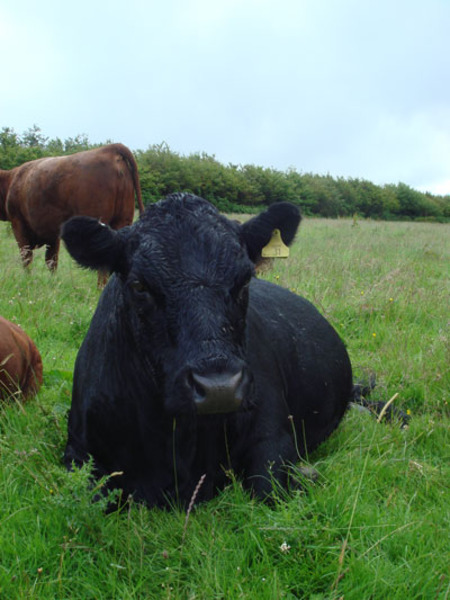 Molly, one of our Dexters is a cow who has passed her useful breeding life, but she continues to live on and in fact provides a different service for us. She lives with our group of young heifers who have to be separate from the others who run with the Bull. A group of young animals like this is often more bothersome, but leaving this old cow with them has an amazing calming effect on the rest of the heifers.

This is not the only thing to make Molly stand out. The most notable thing about her is that she thinks she is a Bull. Her behaviour has shifted dramatically in the last two years and she now displays many Bull like characteristics. She roars, digs the ground and challenges possible threats to her little group like any bull would. She even has a thickening of the neck and has been mistaken by several people for a bull.

The reason behind this is a hormonal one. Her breeding life has come to an end as a result of developing problems with her ovaries. These have stopped functioning and have therefore ceased production of the normal levels of female hormones. The base level of male hormones is probably still normal but now has a more pronounced effect as a result of the diminished female hormones.

Molly Bull died in October 08. She was killed on farm as arthritis got the better of this most determined little cow.