Go to: News | Tales From the Field

As News becomes old news it ends up in here so you can browse our collection of past stories and events.
I’m gradually adding content from the past too as this site is much newer than the Farm and there is much still missing!!
Click the banners to show the articles for that month. 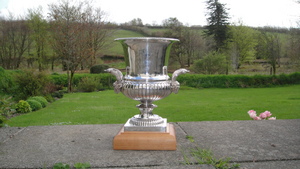 The Ashott Barton Herd won a magnificent silver wine cooler as its prize for Best Herd In Somerset. We were also placed third Nationally, in the medium Herds section.

This years offspring, grand children of Millennium are set fair to carry on our success. I feared that nothing would be the same again when Millennium died. I should have had more faith in his powerful genetic stamp and that of the beautiful cows bought in 2000.

A misnomer! Not one single blade of hay was made this year, its all been wrapped as hayledge.

For the last few years we have managed to make some hey but this year we made 100% hay-ledge. The ‘old boys’ said you need 5 days of really hot sunny weather to make good quality hay. Good Hay is more than just dried grass, mechanically drying by turning it will enable you to get dried grass, but nutrients will have been lost each time a blade of grass is bent. So without a single window of opportunity to make good hay we’ve opted to make the best quality hay-ledge we can and preserve the nutrients by wrapping it.

Today (June 20th 2010) we have started to mow the first of our hay fields. The weather looks like it will hold for a few days, so fingers crossed. Kevin Westcott, our local contractor is doing the work for us.

Shiamala has just has had eye surgery. I’m pleased to report she is recovering ok.

We are taking two heifers by Millennium to the Three Counties Show, June 18th – 20th 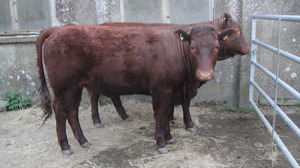 Ashott Barton Bribery 11th and Ashott Barton Tulip 7th. Both out of Champson cows and by Cutcombe Millennium and will be shown by Amy WestWood.
Tulip was born on 24/05/2009 and Bribery on 28/03/2009

Come and see us at: the Three Counties Show in Malvern 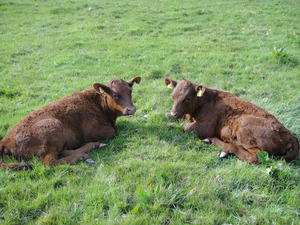 Son of Millennium for sale

Ashott Barton Millennium is two years old and a perfect chip of the old block. Excellent conformation, bomb proof temperament. His dam is Champson Clara 161st. He is Millennium’s parting gift to me and the herd.

April 2nd – A great sense of relief as now all the cows have calved. We had 18 to calve this year, 15 mature cows and 3 heifers. All was well.

Last year we had a number of difficult deliveries caused largely by a poor choice in Bull. We have been rather spoiled by Millennium and were used to his calves just popping out. It’s all in the shoulders!! The Bull for Millenniums daughters bought at great expense was a great disaster. Huge calves leading to death and grief so this year has been a huge relief.

This year we have more of a mixture of calves than usual as we (as an experiment) put some of the cows to an Angus bull. This was mainly to gives these cows who had trouble before a more easy calving.

At the Spring Show and Sale on March 12th we were pleased and very honoured when two established and well known herds’ owners decided to buy our bulls. Millennium-Falcon went to Ivan Row’s Goldings herd in Cornwall. Marquis to Margaret Elliot’s Cutcombe herd in Brompton Regis where Millennium was bred. Millennium’s genes have returned home. Ivan Rowe and Brian Drake were the judges that made Millennium stock bull in 2004. In 2007 Mr. Drake bought Merlin, Millennium’s son. Ivan has long wanted to buy Millennium but told me after the sale that he was now settling for Mel’s son.

Tiny has just had her first calf in March 2010. She is proudly owned by Alec and Sharon Dalgleish. Her calf is a heifer and called snowdrop because she was born while the snowdrops where blooming.

Ashott Barton Morgan is a well bred young bull we plan to take to the Devon Show and Sale in October. Morgan is the son Of Millennium and Woodrow Lillybet. He has inherited the very placid natures of both parents and their excellent conformation. Recent visits from expert old hands and their compliments suggests that we are not being barn blind and that Morgan does indeed have the essentials of well laid shoulders, strong well balanced legs and superb feet. We think excellent feet, good locomotion and rear end stability is essential in cattle but imperative in a bull. Morgan has all these attributes as well as length and general balance and he is the progeny of two animals that consistently produce offspring that grow well on grass at high altitude.

I will be sad to sell him. He is trusting biddable and is so easily managed

Winter calving is well underway and we are rapidly running out of barn space to house the calved cows.

About 20 have calved so far with about 15 still to go.

In this last week (March-18th) all the barns have been mucked out and spread on the fields. The cows are definatly happy with the fresh bedding.

In the Devon Show and Sale on the 22nd March our young bull Ashott Barton Merlin was awarded 2nd place and was sold to the
owner of a well known herd; Brain Drake. We look forward to seeing the progeny of this wonderful Bull.

End of an era at Ashott Barton.

Cowslip and Millie died on the 16th of Jan.2014. Millie was 16 and Cowslip 14.Two memorable and very eccentric animals that were a major part of my education about the Devons’ breeding and genetics.Cowslip came as a 4 week old calf at foot from Kerr’s dispersal sale. Millie ,an unregistered wilding heifer off the bleakest part of the moor.I shall miss old coat hanger(cowslip)and silly Millie. Neither were traditional and did not fit my goals but I don’t get rid of cows easily. By keeping them I have learnt a great deal about Saler and Polled lines and why I don’t think they are the way forward for the breed.